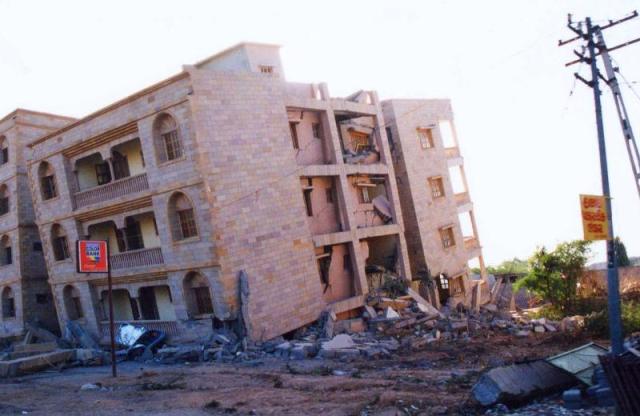 Collapse simulation of structures
Any structure can be designed & constructed to resist earthquake forces. This does not necessarily mean that there should not be any damage to strucutre at all. The design philosophy of IS 1893 says that for minor earthquakes there should not be any damage, for moderate earthquakes, there may be some non-structural damage and for major earthquakes the structure may damage, however, it should not collapse. For ensuring the above design philosophy, we must understand the nonlinear behaviour of structures. With the rapid advancement in the technology, now it is becoming easy to test the behaviour of material for static and dynamic loading. Results from such tests will be used in developing the appropriate constitutive models of material behaviour that fits in numerical simulation of structures.
• Vulnerability assessment of coastal structures
• Tsunami wave propagation modeling and assessment of impact force

Numerical modeling of masonry buildings
Brick masonry has been used as structural material since ancient time. It has been used for the construction of buildings for thousands of years and it has been perhaps the most widely used material in civil engineering building. As we have evidenced large earthquake occurrences in the regions where masonry is being a major construction type, huge loss of lives and property resulted due to collapse of the structures.

Masonry sustains damage in form of cracks in early stage of loading as the mortar break in a low level of load compared to brick units. Unlike in the reinforced concrete where cracks can signify to vulnerability to collapse, onset of cracking along the mortar joints in masonry is indication of inelastic response rather than failure [Langenbach, 1992]. Masonry works well after the first cracking allowing frictional sliding which contribute to energy dissipation. During this process, there could be large displacement discontinuity between the blocks without mush loss in strength. The phenomenon takes place in framed masonry more vividly as panel sustain cracks in early loading but held in place by the confining action of surrounding frame. Earthquake resistance mechanism lies on stability given by the frame that can act in linear range while adjacent masonry panel allowthe excess energy dissipation. In cyclic loading case, separation of wall panel in tension and recontact in compression in successive cycle accommodate large displacement. It is need in analysis to capture this local behavior to represent the overall response of wall in simulation.

In micro-level modelling of masonry, attempts have been made to implement it in Finite Element Method (FEM) of numerical analysis through smeared crack approach [Lofti et al, 1991] and discrete approach with use of interface elements [Page, 1978, Lourenco et al, 1997]. Research has been done with use of Discrete Element Method to analyse the masonry composed of block units [Lemos, 1997]. In Finite Element analysis with smeared model problem of mesh sensitivity, failure to capture diagonal shear have been identified [Lofti et al, 1991] where as FE analysis using interface model overcomes the problems. However, it requires a special treatment for interface element and is time consuming for the analysis of wall structure. Discrete Element Method can deal easier with large displacement and total separation of the bodies. However, poor constitutive laws for brick and interface are used to deal with large collection of blocks. Computational cost in analysis may become very high in this case. Hence in this research we are using, Applied Element Method (AEM) as a numerical tool capable to follow the complete structural response until total degradation in large displacement range with reasonable accuracy [Meguro et al, 2000]. Objectives of the study are:
• Model the brick masonry for numerical simulation
• Investigate unreinforced masonry shear wall under lateral loading
• Investigate the RC framed brick masonry under lateral loading
• Derive recommendation for aseismic measures applied to new construction and retrofitting of existing masonry buildings

Seismic evaluation of heritage structures
India is the country with great architectural legacy. It is dotted with many world famous monuments like the Taj Mahal and Qutb Minar in the north and famous historical temples in the south. Though ensuring the earthquake resistance of general structures is utmost important from life safety point of view, it is also important to ensure safety of historical constructions from heritage point of view. Numerical approach using continuum and discrete models is taken for understanding the behaviour of these structure.