Seismic Microzonation of Indian Mega cities
Depending on various types of data, probability of earthquake occurrence has been worked out and zones have been identified at a macro level, where there are chances of the occurrence of an earthquake of a particular intensity any where in that zone (IS 1893: 2002). Seismic microzonation is the buzzword in India now, as it is recognized as a tool for disaster mitigation and for providing guidelines to the construction engineers. Some states of country have made it mandatory for the new constructions to be declared seismically safe and for this prior approval of the experts is necessary. After the devastating earthquake in Gujarat in 2001, the Government of India has paid serious attention to seismic microzonation and it has accepted its importance as a guiding tool in land use planning and safe construction practices to avoid the loss from the future earthquakes. It requires multi-disciplinary contributions as well as comprehensive understanding of the effects of earthquake generated ground motions on man made structures. The main objective in microzonation studies is to estimate more accurately the possible damage during an earthquake in the future taking into account all the main controlling factors.
As a result of this, seismic microzonation of various urban areas can be attempted for the hazard assessment. 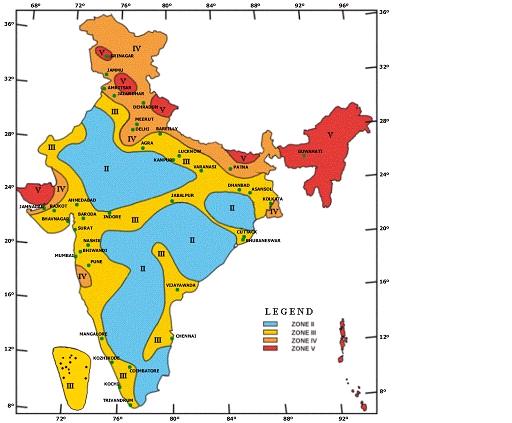 Estimation of Vulnerability Index using Microtremor testing
The site effects are often expressed by the amplification factor and resonance/fundamental frequency. Usually there are various vibrations in the ground which are caused by natural or ambient noise like wind, sea waves, traffic, industrial machinery etc. The range of vibration frequencies of ambient noises is from 0.1 Hz to 10 Hz (i.e. 10 sec to 0.1 sec period).

The vibrations that have comparatively small periods of less than 1 second are called microtremors and those that have a larger period range is called microseisms. Due to close relation between spectral features of microtremors and sites geological conditions, these small vibrations are very useful in earthquake geotechnical engineering. Kanai and Tanaka (1961) have explained theoretical interpretation and practical engineering application of microtremors as a convenient tool for evaluating frequency properties of surface ground and the existing structures. The use of microtremor method for the evaluation of vulnerability index has been restricted to Japan with many controversies in USA and Europe. Applications of this method include site response analysis, natural frequency of structures etc.

The research on Microtremor measurement for the estimation of vulnerability index of the structures and ground can be carried out in Hyderabad city which is having several monuments and also coming up with high rise structures.

Assessment of liquefaction hazard
The losses due to damaging earthquakes can be mitigated through comprehensive assessment of seismic hazard. Seismic hazard can be defined as any physical phenomenon (ground shaking, fault rupture, soil liquefaction etc) associated with an earthquake that may produce adverse effects on human activities. Structural damages can be triggered by ground damages during an earthquake.

Historic large earthquakes throughout the world explain that the liquefaction related ground failure commonly causes extensive structural and lifeline damage in urban areas. The January 26th, 2001 Bhuj earthquake (M = 7.7) was a disastrous earthquake causing extreme structural and geotechnical damages. Many areas in Rann of Kutchh had experienced liquefaction, sand and salt boils, and severe ground cracking. Delineating areas that are susceptible to liquefaction hazards is important for evaluating and reducing the risk from liquefaction and other post earthquake damages through appropriate mitigation. Research on the liquefaction analysis can be carried out for the assessment of seismic hazard in various cities like Vijayawada, Vizag, Guntur etc which are moderately vulnerable to earthquakes.

Soil foundation structure interaction
The dynamic soil structure interaction (DSSI) have a significant effect on the response of the structure like tall buildings, nuclear power stations, large gravity dams, bridges etc. The DSSI includes two main problems, one is the dynamic response of structure and other is input method of seismic wave motion. The estimation of earthquake ground motions at the site of a structure is very important in the design or retrofit of it. If the light weight flexible structure is built on a stiff rock foundation, it is a valid assumption that the input motion at the base of the structure is the same as the free field earthquake motion. However, if the structure is very massive and stiff as in the case of a concrete gravity dam, and the foundation is relatively soft the motion at the base of it may be significantly different than the free field surface motion. The detailed numerical and closed form solution methods are applied to perform soil structure analyses. To date, the recorded strong motion data are insufficient to confirm the validity of the soil structure interaction analysis methods and procedures as applied to structures.