Numerical Modeling of Indian Plate
Indian subcontinent has experienced several earthquakes. The main reason for this is its tectonic setup. An outline of tectonics of India shows that there are three major regions of varied history of development and ages. They are peninsular shield, Himalayan mountain belt & Indo-Burmese range and Sindhu-Ganga-Brahmaputra alluvial plain. Though in last 4 decades many fundamental changes took place in global tectonic process and its understanding, the data is still evolving and the new models for understanting tectonic processes are being introduced. At this stage of rapid developments in computer science and computational techniques, it is not over-ambitious to set a road map for a new multi-disciplinary approach by integrating geo-physical, geological, geo-technical, geothermal and geo-chemical areas for understanding seismotectonics process. Currently, geo-physical, geological and geotechnical areas are being integrated with data engineering and visualization for understanding inter-plate and intra-plate movements. Some ongoing projects in this area are as follows: 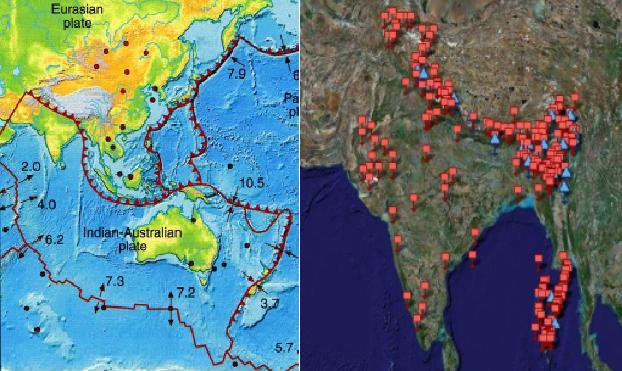 Fault motion analysis
When an active bedrock fault ruptures, the movement along the fault propagates through the overlying soil and produces zones of intense shear. If the fault movement propagates upto or near the ground surface, the damage to constructed facilities due to faulting, in conjunction with that induced by strong ground motion, can be significant. Research in this area contributes to the understanding of the response of soil deposits to the underlying bedrock fault displacement. Currently, numerical simulations of fault motion in 2D and 3D are being done. Since computation time in modeling soil media is very high, parallel processing techniques are being used to optimize the time. Also, the data mining principles are being used to understand huge data sets of the response of soil media. The outcome of this area is proper understanding of response of the soil media with all its hetrogenieties. Some of the on-going projects in this area are as follows:
• 2D Numerical modeling of dip-slip faults
• 3D Numerical modeling of strike-slip faults

Wave propogation & site amplification
It is observed that large concentration of damage in specific areas during an earthquake is due to site dependent factors related to surface geological conditions and local soil altering seismic motion. Generally, the soil layers over the firm bedrock may attenuate or amplify the base rock earthquake motion depending upon geotechnical characteristics, their depth and arrangement of layering. Usually the younger softer soils amplify ground motion relative to older, more competent soils or bedrock. Local amplification of the ground is often controlled by the soft surface layer, which leads to the trapping of the seismic energy, due to the impedance contrast between the soft surface soils and the underlying bedrock. Various studies have demonstrated the ability of geological and geotechnical conditions in changing the seismic motion. It has been reported that the damaging effects associated with such soft deposits, may lead to local intensity increments as large as 2 to 3 degrees in MM scale. Local soil conditions has significant role on amplification of seismic waves, and being experienced in the past earthquakes. The nature and depth of the soil layers have a great influence on the intensity at ground level. Therefore, the site response has become one of the most relevant tasks in the seismic hazard analysis. Some of the on-going projects in this area are as follows:
• Wave propogation in unbounded media
• Site amplification studies

Estimation of Ground motion parameters
An important problem in earthquake engineering is the prediction of ground motions from the future large earthquakes. Seismological input that describes the amplitude, frequency content and duration of the expected motions are required to assess the seismic performance of the structures. There has been a great progress in the last few years in the study of strong earthquake ground motion and its engineering applications. The damage resulting from earthquakes may be influenced in a number of ways by the characteristics of the soils in the affected area. Earthquake engineers are interested in strong ground motion i.e., the motion of sufficient strength to affect people and their environment. At a given site, the earthquake ground motions can be completely described by three translational and three rotational components. In practice, the rotational components are usually neglected and the three translational components of motion are most commonly measured. It is important to describe the characteristics of the ground motion that are of engineering significance and to identify the ground motion parameters that reflect those characteristics. Generally ground motions with high peak accelerations are more destructive than ground motions with lower peak accelerations. There are several approaches in the estimation of ground motion parameters, i.e., deterministic method (Hartzell, 1978; Irikura, 1983), stochastic method (Boore 2003) and hybrid method (Kamae et al., 1998; Pitarka et al., 2000, 2002; Pulido and Kubo, 2004; Pulido et al., 2004). A discrete finite fault model that captures the salient features of radiation from large earthquakes has been a very popular seismological tool for the last two decades. Hartzell (1978) introduced this first as a finite fault plane, which is subdivided into smaller elements. The contributions from all the independent sub faults are summed up in estimating the ground motions parameters from a large earthquake. Estimation of peak ground acceleration at bedrock level is very important in seismic hazard study of an area. This PGA for a particular site depends strongly on the magnitude of an event and the corresponding hypocentral distance. Generally, rupture starts at hypocenter and propagates radially triggering the sub faults as it passes them. The fields from all sub events are geometrically delayed and added together at the observation point. The severity of ground motion generally decreases with distance. This is usually quantified in terms of the attenuation of the peak ground acceleration (PGA) with epicentral distance. A number of attenuation relationships have been proposed by several researchers all over the world. The value of peak ground acceleration depends not only on the epicentral distance but also on site conditions, which is an important input parameter in seismic design of structures and liquefaction hazard analysis.

So, estimation of the site specific ground motion parameters for the cities like Hyderabad, Vijayawada, Guntur and Tirupati will be very useful for the design engineers.